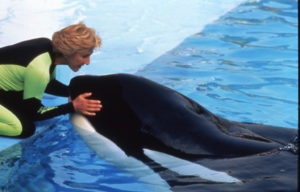 One of the many unique attributes of TTouch is that it can be used on all species. The TTouches help to reduce stress, fear and timidity and promotes calmness, self-confidence and relaxation in both the animal and the handler. By offering an alternative to dominant and forceful handling techniques, TTouch can be used on a wide variety animals including dogs, cats, rabbits, birds, reptiles, wildlife and exotic species to minimize the stress of human contact in rescue, veterinary care and rehabilitation as well as giving handlers and owners valuable tools to help create a unique partnership with the animal in their care whether it be a snake, a tortoise, an owl, a parrot or a bearded dragon. TTouch techniques are invaluable for animals where previous inappropriate handling or lack of socialisation has resulted in defensive reactions towards people or other animals.            TTouch can enable an animal to move beyond its instinctive responses. By using simple steps to help animals overcome habitual or learned responses to human contact, the majority of animals respond quickly to this unique approach.  This is especially helpful in a veterinary practice.

Where contact with humans needs to be minimal and as stress free as possible some of the simple body TTouches such as Ear Work can be used while the animal is receiving veterinary care.

TTouch does not create an unwanted dependency on human contact. In cases where human contact must be kept to a minimum to ensure a successful rehabilitation, the TTouches and techniques are used to reduce stress and shock in the sick or injured animal to enable appropriate human interaction to take place without causing further distress. 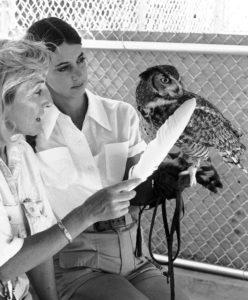 A variety of tools can be used to initiate contact with the animal.  Great emphasis is placed on approaching the animal with care and respect to allow it to become accustomed to human contact in small stages. By working with a step-by-step approach, TTouch allows an animal to think through each process so that it can learn to trust not only the human but also its own ability to communicate. Simply forcing contact on an animal causes stress, encourages the animal to ‘shut down’ and can exacerbate the defensive cycle of behaviour.

Animals respond well to a variety of different textures. Paintbrushes, wands (stiff dressage whips) and feathers have been used successfully in many situations to initiate contact with the animal. They enable the handler to approach the animal without overcrowding and without using the hand which can cause alarm and concern for the animal. Stroking and the circular TTouches can all be done with the tools.

TTouch is not just confined to the animal that is shy of contact. It has far-reaching health benefits and can be used alone or with appropriate veterinary care to overcome a variety of problems. Many veterinarians, veterinary nurses, zoo keepers, animal handlers, carers and trainers use TTouch to enhance an overall sense of health and wellbeing in the animals in their care. It may take several sessions to reach this stage. Short sessions over a period of time are preferable to one long session and it is often in the time out period that the animal makes the most change. There can be nothing more rewarding than helping an animal over come its fear of human contact. With TTouch the impossible can become possible.

The Transformation of Frances

At the Pasadena, California training in November 1996 Robyn adopted a new member to her large family of animals. Her latest is a four-year-old double yellow-headed Amazon parrot named Frances. Frances was brought to the training because she had been so aggressive in her first home that she was given away. She had jumped off her perch and attached herself firmly by her beak to the heel of a family member. Gina Arons-Ventress, director of the Second-Chance program at the Pasadena Humane society, brought Frances to be worked on. I had previously experienced an Africa Gray parrot in Israel who became extremely aggressive when her favourite person was gone for a month so Frances’ behaviour was no surprise to me.

I began working with Frances using two feathers to stroke her legs and chest. After a time she became interested and began making an unusual cooing sound which I mirrored back to her. I was wearing Eddie Bauer lined pigskin gloves which prevented her from potentially wounding me if she decided to bite.  Although many bird experts apparently do not recommend gloves for working with smaller parrots I have had excellent luck wearing them because I become less vulnerable.  Within 15 minutes I wrapped Frances in a towel and did more TTouches on her head and neck. To everyone’s surprise, when I unwrapped her from the towel I was able to work her beak and touch her tongue, something parrots love when they trust you. She continued cooing and talking to me in parrot language and soon she was standing on her head with her neck pressed sideways on the towel, her trail straight up in the air, cooing and obviously loving the stroking and TTouching. This was all it took to bring out her good nature. Robyn began working with her and it was love at first sight. Frances was friendly with everyone who handled her, most unusual for a parrot, but she spent much of the rest of the training on Robyn’s shoulder.

That was 20 years ago and Frances lives happily at the Icelandic Horse Farm in Vernon, B.C.  When she arrived here Frances made Phil, Robyn’s husband, her main person but is accepts the rest of the family well.  Frances is rarely in a cage and has perches all over the house.  In the summer she spends much of her time outside and one of her favourite activities is riding on Phil’s shoulder while he is driving the 4-wheeler out to change the irrigation.

Due to the Covid-19 Pandemic, all March & April Events have been post-poned. Dismiss